Who run the show? Stage Managers! 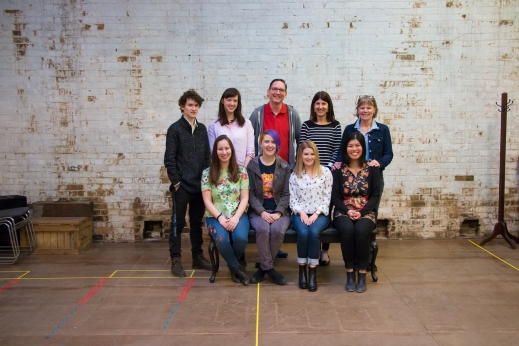 The week of March 19, Soulpepper had 12 stage managers working in the building at once. We had Marinda and  Lucia and Neha and Meghan working on the shows already on stage , Idomeneus and Animal Farm. Neha and Meghan were also in the final stages of rehearsal before A Moveable Feast: Paris in the ’20s hit the stage. The rest were prepping for rehearsals. Sarah, Ian, and Kelly, were working on Innocence Lost: A Play About Steven Truscott,  Robert, Liesl, and Seren, are working on La Bête and Darragh and Sam were prepping for Ma Rainey’s Black Bottom.

While stage managers are no doubt most organized people in the building, organizing a moment where all 12 were on a break proved to be a challenge… At most we could manage to stage nine of them for a photo!

Almost a full company – nine of the twelve SMs goofing around!

We took the opportunity to ask them to share some thoughts on their experience as stage managers – here is what they had to say.

Why did you decide to be a stage manager?
Two teachers encouraged me towards stage managing our high school’s production of Into the Woods. I had no idea what I was getting myself into but loved every moment of the sublime chaos that ensued. That experience became the catalyst for me to pursue post-secondary studies in technical theatre production/stage management. I never looked back.

What is your favourite cue you’ve ever called?
So many cues! It’s impossible to choose a favourite. One that immediately comes to mind: a lighting cue in Theatre Passe Muraille’s production of The De Chardin Project (directed by Alan Dilworth and designed by Lorenzo Savoini) which slowly revealed the audience and actors to one another via dozens of bare light bulbs hung throughout the theatre. A beautifully breathtaking event to witness each evening.

What Soulpepper show are you working on?
I am currently Stage Managing La Bête, in addition to my ongoing Production Stage Manager duties.

Why did you decide to be a stage manager?
When I started my BFA in Stagecraft I didn’t even know what a Stage Manager was! Starting out, I was much more interested in lighting, but found that narrowing my focus (pardon the pun) to that one aspect of production left me with many unanswered questions on how the rest of the show came together.  Something really clicked when I got my first Stage Management assignment.  A broader understanding of the process is required and that was something that really appealed to me.

What is your favourite cue you’ve ever called?
For The 39 Steps, Verne Good designed an amazing sequence of sound cues to accompany a choreographed scene of the 4 actors opening and closing doors, starting the car, driving around sharp turns, slamming on the breaks and honking the horn.  That whole show was filled with sequences like that and was a lot of fun to call.

Why did you decide to be a stage manager?
I got the opportunity to work backstage at my local community theatre in high school, and absolutely loved it.  There’s a wonderful sense to togetherness and family about working on a show.  Through theatre school, I tried many different theatre production disciplines, but kept coming back to stage management.  I love that you get to be involved in each part of the process from very early stages right to the very end.  You also get to help create art!

What is your favourite cue you’ve ever called?
I really enjoy calling precisely timed music cues.  In a show called Cockfight at the Storefront Theatre, I had a cue that brought us out of a blackout into full stage light that went exactly with a beat in the music.  It took a couple of tries in tech rehearsal, but once I got it right, it was exciting every time.

Do you have any fun backstage rituals?
I really like being an ASM because I get to observe or be a part of other people’s backstage rituals.  The cast of Animal Farm sings one of the songs from the show just before they go onstage, and it’s fun to be in the middle of that.

Why did you decide to be a stage manager?
In grade seven I joined the drama club, and was given the role of Dancer #4 in Newsies. In between scenes I would stay backstage to label costumes, shush noisy actors, fix broken props, and tell people which scene was coming up next. Eventually, a couple years later, I learned that this was called stage management.

Do you have any fun backstage rituals?
I love the moments I spend with the actors backstage – when we connect during a quick costume change, or share a joke together every night. I often work on musicals, so there are a lot of backstage sing-and-dance-alongs. Sometimes there’s a line or a lyric that I listen for every evening – because it makes me laugh, or because it moves me in some way.

The views and opinions expressed in the articles are those of the author and do not necessarily reflect those of the organization. 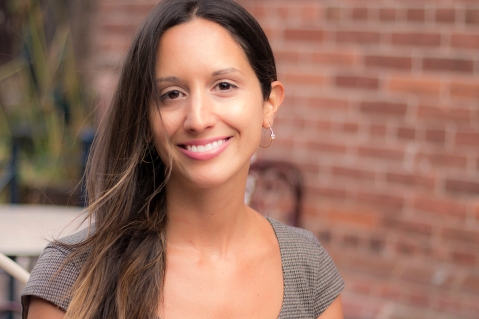 How long have you worked at Soulpepper and tell us a little bit about what your job consists of lately.
I have worked at Soulpepper for just over a year. As Marketing Manager, my role consists mostly of planning fiscal advertising campaigns, monitoring the marketing and communications budget, maintaining strong relationships with tourism, industry, advertising and community partners, and working with our team to plan and execute email, digital, and print marketing campaigns. I represent Soulpepper on the Toronto Attractions Council, and on the SOTUG (Southern Ontario Tessitura User Group).

What kinds of projects are you involved in outside of work?
Outside of work, I sit on the Board of Directors at Vaughan Public Libraries, and volunteer with a number of organizations, including the University of Toronto Alumni Association and Humanity First. I am also a writer, and have been published in various literary journals, magazines, and anthologies. My first book of poetry was published in 2012, and a few short stories will be published in an upcoming anthology of Italian-Canadian writers this year.

When you’re not at work, what are you doing?
Swimming, yoga, reading, spending time with loved ones, and exploring the city by foot are a few of my favourite activities. I also enjoy cooking and seasonal culinary traditions – ie. helping my father make wine and tomato sauce in the late summer, apple-picking in the fall.

What is something we would be surprised to know about you?
Every year, I endeavour to learn something new. In 2015, I wanted to learn something beautiful – so, I took up Spanish language courses. Last year, I completed the final course in the certificate. ¡Hola! This year, I am taking a course in neurobiology.

What do you love about working at Soulpepper?
I love working with a team of passionate, intelligent people, who inspire me daily. I love staff meetings and Opening Nights. I love creepily looking around the theatre at audience members reacting to a show we’ve all worked hard on for months. I love reaching the end of a performance, because the range of emotions I feel as a result of whatever is on stage reminds me of why I do what I do.

In The Presence of the Unknown – Katrina Darychuk

I am writing this on the train from Stratford to Toronto, whizzing past farmland. Three months ago I came to Stratford with my mentor and Soulpepper Associate Artistic Director Alan Dilworth to work on The Virgin Trial, premiering in few weeks.

It is a sequel to Kate Hennig’s The Last Wife, which premiered at Stratford two years ago and at Soulpepper this winter.

I’ve spent most of my time as a director in new play territory. Working to give life to worlds that have yet to come to the stage. While these processes have similarities, there is a constant presence of the unknown.  How do you embrace it? Dance with it? Make it a part of the piece? Working as an assistant director on a new show is fascinating as I am privy to a team in ‘reveal’ mode. Every choice in terms of action, design, or new text, reveals more of the inherent nature of the play.

Something inherent in developing new work is that you must be open to the element of surprise.  Even after workshops, and readings, the life of a new play isn’t revealed until weeks into rehearsal.  Just as everyone starts to think they know what it is, it wants to be something else. New plays are delicate. The creative team shares their genesis in a very intricate way.  There is no original to look back on; there is no precedent to compare to.

Years ago, a colleague said, “You can only polish dead things”. As with many quotes in theatre, the author is lost but it is wisdom I hold dear. What is most thrilling for me about new work is its infancy; it’s innate life that is trying to find its way into the light. Not to be polished, but be offered for the first time.